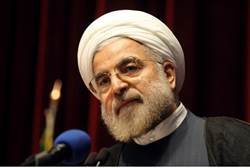 Iran's new defense minister is behind past attacks against Americans and Israelis, the Israel Hayom newspaper reported on Monday.

The Islamic Republic’s new president, Hassan Rouhani, has appointed Brig. Gen. Hossein Dehghan as the new defense minister. Dehgan, according to a report by Brig.-Gen. (ret.) Dr. Shimon Shapira, a senior research associate at the Jerusalem Center for Public Affairs, was responsible for attacks against U.S. and Israeli forces in Lebanon in the 1980s.

The appointment will become official once it is approved by the Iranian parliament, which began debating Rouhani’s new cabinet on Monday.

Dehgan has reportedly served in the Revolutionary Guard his entire military career, since the Islamic revolution in 1979. According to Shapira's report, as it was cited by Israel Hayom, Dehghan was sent to Lebanon after the beginning of the first Lebanon War in the summer of 1982.

Dehgan served as commander of the training corps of the Revolutionary Guard, first in Syria and soon after in Lebanon, according to Shapira. In this role he was responsible for building up military force of the Hezbollah group, which was also established at that time.

It was from this base, says Shapira, that Iran controlled Hezbollah’s military force and planned, along with the Shiite organization, the attacks on the Beirut-based Multinational Force and against Israeli forces in Lebanon.

The attacks, according to the report, were carried out by the Islamic Jihad organization, headed by Imad Mughniyeh, which was actually a special operational arm that acted under the joint direction of Tehran and Hezbollah until it was dismantled in 1992.

Mughniyeh was killed in 2008 in a car bombing in Damascus, which Hezbollah insists was caused by Israel. A report in the Lebanese daily Al-Akhbar a few months ago presented what it claimed was a detailed account of Mughniyeh’s assassination, which was blamed on the Israeli Mossad.

On October 23, 1983, a Shiite suicide bomber detonated a water tanker at the U.S. Marine barracks in Beirut, killing 241 Marines; simultaneously, another Shiite suicide bomber blew up the French paratroopers’ barracks in Beirut, killing 58 soldiers. It was Mughniyeh who dispatched both bombers. The order to carry out the attacks, according to Shapira, was transmitted, and the funding and operational training provided, with the help of the Revolutionary Guard in Lebanon under Dehgan's command.

The AMIA bombing, considered the deadliest attack in Argentina’s history, killed 85 and wounding hundreds more. The Argentine government had accused the Iranian government of planning the attack and Iran’s Hezbollah of carrying it out. Numerous former and current Iranian officials are wanted by Interpol in connection with the bombing.

Rouhani has been described by the West as a “moderate”, but Israel has warned that he is a wolf in sheep’s clothing, particularly when it comes to Iran’s nuclear program.
Story Code: 82928

Duterte: US endangering regional security by storing arms in Philippines